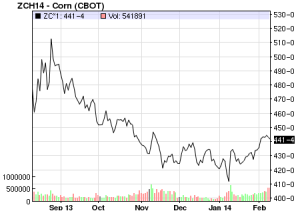 Nebraska landowners and farmers are always on the lookout for trends and forecasts of what they can expect for weather, commodity prices, and farmland values. The prospect of rising interest rates and lower commodity prices have many wondering if the high land value they’ve grown accustomed to over the last ten years is about to change.

Opinions vary, but many analysts agree that, for now, farmland values have reached their zenith. While most don’t expect there to be a bubble burst, it is generally agreed that the going rate for acres won’t continue to rise, and may have reached a plateau for the time being.

According to Iowa State Economics professor Michael Duffy, “It’s going to be more akin to a tire that gets a nail in it, a slow letdown,” he says. “A lot of it will depend if commodity prices stay in this downward trajectory or they flatten out.”

Grain prices tend to cycle from high-profit to low-profit. Corn prices have averaged $4.77 a bushel between 2006-2012, which is likely a new plateau in comparison to what they were prior to 2006. While the recent USDA report held bullish reports for corn, the corn price could still drop lower should the 2014 crop yield higher than average, resulting in the possible lowering of land values. In turn, should grain prices remain lower or recede, farmers will have less net cash income—a major driver of farmland values.

On the other end of the opinion spectrum is Terry Kastens, an agricultural economist at Kansas State University. He contends that “U.S. farmland values are at a ‘tipping point’ and could fall as much as 10 percent in 2014 as commodity prices flatten out.”

After a somewhat surprising USDA farm report on January 10th, that reported more bullish than expected corn bushels, it would seem that Duffy’s statement is more accurate, and that a leveling off of commodity prices might sustain current farmland values.

In Nebraska, farmland values rose 13 percent in the third quarter, according to the Kansas City Federal Reserve branch, whose area includes Nebraska. Some agricultural bankers said these figures, while still an increase, illustrate a moderating of prices from other recent values.

With so many variables at play, it is next to impossible to predict with certainty what Nebraska farmland values will do next, but the broader context seems to support a slow-down when it comes to money for farm acres.  In the meantime, the 2014 growing season and subsequent yields for the new crop will further determine if farmland values will continue to moderate in our state.

Let the land management professionals at UFARM help you stay on top of all the latest business and marketing trends for your farmland.  Contact United Farm and Ranch Management today.

4 Skills a Professional Farm Manager Must Have in the 21st Century
Harvest Time Busy for Land Managers as well as Farmers
Irrigated Nebraska Farmland: What’s the future for water?
Demand for Quality Farmland Remains Strong in 2014
Should the February WASDE Report Effect Planting Decisions?
What Value Can A Land Manager Add To My Land Investment?
Fall Tillage on your Land: Pros and Cons
Why Is Farmland a Good Long Term Investment?

Given email address is already subscribed, thank you!
Oops. Something went wrong. Please try again later.
Please provide a valid email address.
Thank you, your sign-up request was successful! Please check your e-mail inbox.
Please complete the CAPTCHA.
Please fill in the required fields.
What Makes Organic Farming A Fit For Your Farmland?Emerging Technology Trends in Agriculture
Scroll to top