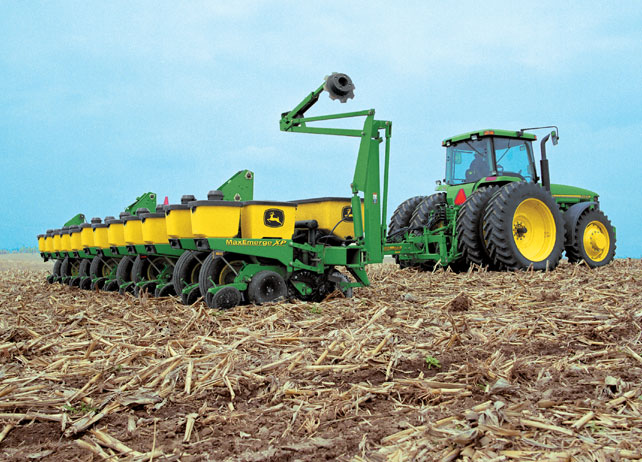 After a quick start, corn and soybean producers across Nebraska and the nation are barred out of the fields to complete their last acres of planting, courtesy of a rainy, cool weather pattern. The latest weekly USDA crop progress report, postponed by one day due to the Memorial Day holiday, reflected this slowdown, both for Nebraska farmers and those in the 18 other states reported on.

Despite the slowdown, the nation’s crop producers are still ahead of the previous average, and emergence for both corn and soybeans made great bounds in the last week, according to the report numbers.

Taking a closer look at the national corn numbers, as of the week ending Sunday, May 24th, 92 percent of the nation’s corn crop is in the ground, up 7 percent from the previous week, and still ahead of the normal pace by 5 percent. Corn emergence stands at 74 percent, up considerably from 56 percent a week ago. Emergence now sits 12 percent ahead of the normal pace for this week of the year.

This should come as no surprise, as the state has face cool, wet weather that has prevented planters from entering the fields. According to the latest report:

“For the week ending May 24, 2015, cloudy, wet conditions hampered spring planting activities with an inch or more of rainfall common in the western half of the state. Temperatures were again cool, and averaged six to eight degrees below normal.”

While it’s not a problem to have adequate moisture for emerging crops, too much coupled with long durations of cloudy weather can cause problems. Many producers are reporting yellow corn in the state. A WCMO listener stated, “A lot of acres here [are] looking under the weather in south-central Nebraska. Way too much cloudy, drizzly weather. Starting to see chemical damage in corn from not being able to metabolize the chemicals. A lot of the corn has bad color. Some beans have been in the ground for almost 2 weeks and haven’t emerged yet.”

The weather forecast across the northeast, north central and south central parts of the state predict yet more rain chances in the coming days, coupled with cloudy weather. Farmers will be on the lookout for sun and a chance to get those last few acres in the ground.

Can Your Land Benefit From Cover Crops Like Turnips And Radishes?
Benefits of GMOs in Agriculture
What Does The Latest USDA Report Mean For Landowners and Farmers?
What did the August 12th USDA WASDE report hold?
Where are 2015 Nebraska Farmland Values heading?
The Comeback Crop: Alfalfa
Nebraska Corn and Soybean Planting Progress Report
What Makes Organic Farming A Fit For Your Farmland?