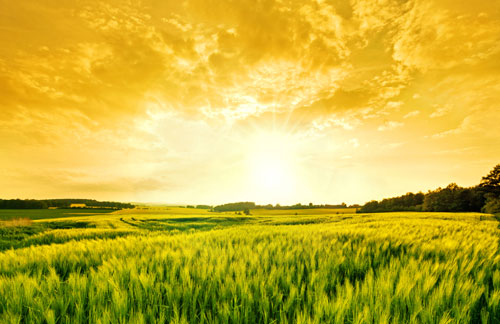 The May Baskets had been made, delivered and stored for next year, but that didn’t matter to Mother Nature, as a snowstorm blanketed a large portion of the Nebraska Panhandle on May 9th. Most of the wheat-growing regions from the southern Panhandle to South Dakota received anywhere from 6-18 inches of snow, causing some damage to the crop of varying degrees.

The snow presents yet another challenge to wheat growers in the area, some who have already been dealing with winter injury or winter kill, relating to variety, seeding date, and seeding depth. Now, with the May snow, the total impact could be significant, given the 695,000 acres of wheat this year, as reported by the Panhandle Crop Reporting District.

Growers have been busy assessing the type and degree of damage, and are encouraged to spend some time doing so. While the crop may appear to have recovered, closer inspection often displays damage not detectable from the road. UNL Extension Specialists Karen Deboer and Robert Klein reported that 10-40% of the wheat stems in the field had been broken or damaged due to lodging from the heavy, wet snow.

According to Deboer and Klein:  “The many factors influencing freeze injury to wheat — plant growth stage, plant moisture content, and duration of exposure — often make it difficult to predict the extent of injury too quickly. This is complicated further by differences in elevation and topography among wheat fields and between the fields and official weather stations. It is not unusual, for instance, for wheat growers to report markedly lower temperatures than are recorded at the nearest official weather station.”

While wheat can compensate since remaining tillers with viable heads, wheat will not compensate for lost stems if loss is above 25-30 percent. Should growers already have substantial winter kill, it is in their best interest to take great care in determining if the wheat should be brought through to harvest.

After determining the extent of damage, there are a few options for growers. If there is significant damage, the first option is to take the crop to harvest. This is also the least expensive option, and, depending on crop insurance coverage, may not make money, but will keep the producer from losing money. According to Extension Specialists at the Panhandle REC, “The projected price on crop insurance for wheat is $6.41 per bushel, so producers with revenue coverage may have an attractive revenue guarantee, relative to expected actual revenue from both lower yields and lower prices.”

A second option is to use the crop for forage. This could be done either by harvesting it or for grazing, while also providing grazing animals with supplements for bloat prevention.

Another option is to remove the wheat altogether, through tillage or an application of Roundup, and planting it back to proso millet, corn, or sunflower. Extension specialists recommend that growers first review their herbicide program. That way, they could “make sure there would be no plant-back restrictions. [They should also] check crop insurance provisions for fallow eligibility.”