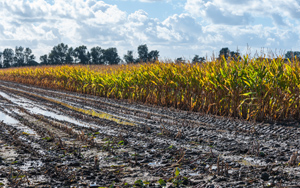 Over the last several months, meteorologists have been duking it out over the chances of an El Nino occurring, and the ways this could affect Nebraska harvest weather, and the winter and spring to follow.

An El Nino occurs when the Pacific Ocean surface waters warm up to above normal temperatures—usually about one degree Celsius above average. This rise in temperature alters the atmospheric pressure over the Pacific Basin, which in turn alters the jet streams over the United States. Those whose livelihoods depend a lot on the weather understand that jet streams are the driving force behind the storm systems and temperature boundaries that affect our regions. El Nino weather patterns in past years have had an impact on Midwest growing seasons and yields, so it is no wonder that farmers pay attention when such a pattern may be in the works.

How does El Nino usually affect Nebraska? While most of El Nino effects are not felt until the following calendar year, it usually means higher than normal winter temperatures and precipitation, although the effects aren’t quite as clear as they are in other parts of the country. It is generally accepted that an El Nino weather pattern is favorable for US grown crops, since in addition to slightly warmer temps and above average winter precipitation, it brings more precipitation during the summer months as well.

So, what’s the verdict? While there was a 70% chance of an El Nino weather pattern back in June, it appears that weather experts have backed off that prediction some, to just 50%. Should El Nino still develop before the year is out, it is unlikely to be a strong event. According to the Australian Bureau of Meteorology: “Despite the tropical Pacific Ocean being primed for an El Niño during much of the first half of 2014, the atmosphere above has largely failed to respond, and hence the ocean and atmosphere have not reinforced each other,” states the bureau. “As a result, some cooling has now taken place in the central and eastern tropical Pacific Ocean, with most of the key NINO regions returning to neutral values.”
Overall, Nebraska has seen below normal summer temperatures. While no one is complaining about the moisture in most areas of the state, there are concerns about replanted corn reaching maturity over the last few weeks of the growing season, as well as concerns with a potential early frost, which would obviously have adverse effects on replanted, late-planted, and long-season hybrids.

The Climate Prediction Center put out their September-November forecast on August 21, and overall, Nebraska has increased odds for above normal precipitation during the harvest months, as well as portions of the state possibly facing below normal temperatures. This brings concerns about the ability for crop maturity, as well as for drying down.

Do you have concerns about the upcoming harvest? Contact a UFARM land manager—they are happy to offer helpful advice for all your harvest and weather-related concerns.