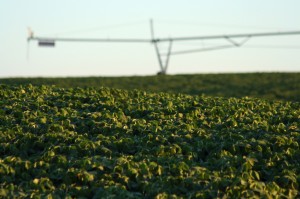 Landowners are always endeavoring to get the most from their farmland, and this is especially true when negotiating cash rental rates with potential tenants. While there are many factors in play when it comes to lease rates, one of the most significant is whether or not their parcel of land is under center pivot irrigation. As many savvy landowners readily discover, there is a strong correlation between higher cash rental rates and the presence of center pivot irrigated acres.
Cash rental rates have been steadily rising over the last several years, and demand remains high for quality rental acres. Trends over the last several years, when rainfall has been adequate or exceeded expectations, suggest that would-be tenants have been willing to pay a straight per-acre rate for both irrigated and dryland corners in their rental agreements, since the yield difference between the dryland corners and the irrigated acres have been smaller.
However, after 2012’s severe drought, tenants are becoming more interested in negotiating rental contracts with per-acre rates based on the irrigated circle and the dryland corners, this according to survey results conducted by the Ag Econ Department at the University of Nebraska. The survey looked at the five reporting Agricultural Statistical Districts in Nebraska and found that in all five, the cash rental rates were an average of $9-$33 per acre higher when rates were based only on the center-pivot irrigated acres, and not the whole parcel.
Specifically, in the Northeast Nebraska reporting district, the results of the survey found that the center pivot irrigated only price per acre average was $397, versus $379 for the center pivot whole parcel average, a difference of $18 per acre. The difference may also be attributed to high demand for acres to farm and high competition to win leases in this part of the state.
Indeed, it has been noted that it is cheaper to buy an acre of untillable grazing ground in northwest Nebraska than to rent an irrigated farm acre in the eastern portion of the state for one year. The same UNL survey cited the going rate for the highest quality irrigated rental acre was $439, versus $379 sale price for a grazing acre.
So, what does this mean for landowners? Obviously, it’s a great economic benefit to have center pivot capabilities on your farmground, as tenants are obviously willing to pay more for irrigated acres at this time. Landowners seeking to maximize their land asset should take advantage of the economic benefits that come with irrigation. If your ground is dryland, it’s a good idea to evaluate it and decide if the benefits that come along with adding a center pivot are worth the initial cost. The findings of this survey and trends over the years suggest that the higher cash rent premiums that accompany irrigated land are worth the efforts.
Are you striving to make the most of your farmland? Are you wondering whether you are negotiating appropriate rental rates? Give UFARM a call. We have the experience and expertise to help you make the most of your farming operation.
Source:
“Center Pivot Rental Rates With and Without Adjustments for Dryland Corners.” Cornhusker Economics. Agecon.unl.edu. 31 Jul. 2013. Web. 14 Apr. 2014. 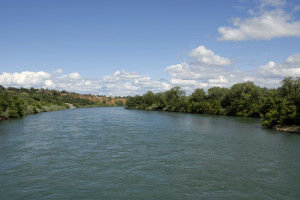 Nebraska is known for its Cornhuskers, but perhaps a more likely mascot would be the Irrigators? According to the results of the 2007 Census of Agriculture, Nebraska is ranked first in the entire nation for total irrigated acres, even falling ahead of the state of California. The Census of Agriculture is conducted every five years, and while the newest 2012 numbers are yet to be released, other statistics corroborate this agriculture trend in irrigation.

Specifically, areas in the north and northeast portions of Nebraska have seen the most irrigated acres expansion, where fewer restrictions have been in place up until the last year or two. Antelope and Holt Counties are ranked one and two, respectively, in their expansion of irrigated acres since 2008. Nebraska’s irrigation expansion makes sense, since our state just happens to lie on top of one of the largest freshwater seas in the nation, the Ogallala Aquifer. Combined with higher commodity prices and land values, producers have sought to expand their crop ground.

Some, however, aren’t as optimistic when it comes to water management in our state. Drought concerns, especially after the 2012 growing season, coupled with the news that certain areas of the state are being classified as over appropriated when it comes to the water supply, are keeping area farmers keenly attuned to all things water-related. When an area is deemed over appropriated, it means that the water demands on the area aren’t sustainable with existing supply. This is when the state’s Natural Resource Districts put restrictions on new applications for irrigated acres, transfers, and supplemental irrigation wells, as the Lower Elkhorn NRD board voted to do in November. The board did provide one caveat: It will grant up to 10 acres per project for those who want to complete a full circle for a pivot, up to 400 acres total, this according to Farm Journal Editor Nate Birt, on agweb.com.

While we have a collective interest in maintaining good stewardship of our water resources, it’s also in our state’s economic interest to provide farmers the opportunity to make the most of their land, and the ability to irrigate helps not only them, but the Nebraska as a whole. A study by the Nebraska Farm Bureau found that irrigation helped both the state jobs outlook and the economy in 2012. More specifically, the study found that farmers’ ability to irrigate their crops contributed $11 billion to the economy that same year.

Regarding the important findings of the study, Nebraska Farm Bureau President Steve Nelson explained, “The major take away from the study is that water used for irrigation in agriculture plays a critical role in the state’s economy, whether it’s direct financial benefit or helping protect Nebraska jobs. Given that reality it’s critical we as a state continue to recognize its importance as we talk about future management of our state’s water resources and the role of irrigation in Nebraska agriculture.”

Potential limits on the amount of water producers are allowed to put onto the ground are putting pressure on farmers to become ever more efficient with their irrigation systems. Farmers are researching the best practices for irrigating their crops, whether it’s being smarter about when and how to apply water, to investing in the latest irrigation technology, such as soil moisture probes and variable rate pivots, to help them irrigate as efficiently as possible.

Meeting the needs of our own land and preserving our state’s natural resources is a delicate balancing act. Don’t go it alone—let UFARM help you make the best decisions for your land in light of changing demands.