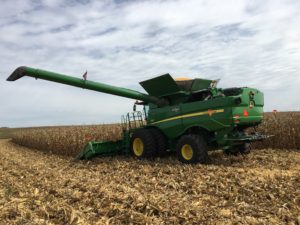 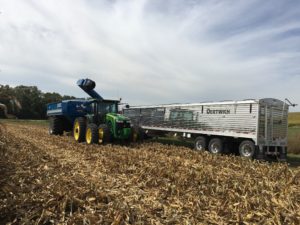 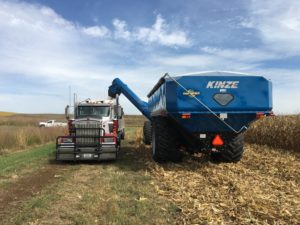 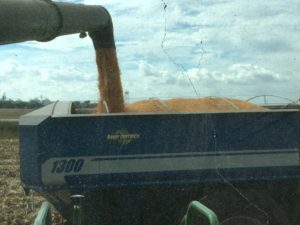 Harvest is in full swing across the Cornhusker State. Soybean harvest is nearing completion as farmers hasten to bring in what they can while the weather conditions remain favorable.

UFARM manager Mike Waller, located in Kearney, notes, “the harvest progress in the South Central part of the state is moving along at a rapid pace, with soybean harvest at about 90 percent complete. Soybean yields range from 70 to 85 bushels per acre, with some at 90 bushels per acre.

Waller also reports that most of the high moisture corn has been harvested. The weather conditions up until this week have allowed the plants to dry down quickly, with dryland corn in Harlan and Furnas Counties being harvested with moisture levels around 14-16 percent. Dryland yields range from 125-240 bushels per acre, with irrigated corn yields in Phelps and Kearney counties in an equally wide range of 175-240 bushels per acre, and moisture levels between 15-20 percent. Waller attributes the wide yield range to the abnormal weather conditions that occurred in early June, with significantly higher than average day- and nighttime temperatures. As a result, many cornfields in this area have abnormal ears or barren stalks.”

Norfolk UFARM manager Randy Oertwich reports, “the soybean harvest in the Northeast part of Nebraska was off to a good start, but was stalled by last week’s rainfall on Monday the 3rd and Thursday the 6th. Oertwich also notes that the soybean harvest has been difficult for some due to very dry beans and pods on green stems. Soybean yields have been in the 60-65 bushel per acre range.

High moisture corn is still being harvested, as well, with some producers combining corn in the 16-19 percent range. Yields in Northeast Nebraska have also been more sporadic than normal attributing to bottom ground replanting in late spring. Dryland corn for this portion of the state has seen 190-220 bushels per acre, with irrigated in the 225-245 bushels per acre range.”

UFARM manager Jeff Frack from the Lincoln office reports that “Harvest in the Southeast part of the state was brought to a screeching halt with the 1-4 inches of rain the area received last week. Up until that point, corn yields were varying from 110-205 bushels per acre, with the wide range attributable to summer moisture. Soybean yields were at 40-66 bushels per acre, again owing to a lack of adequate summer rainfall. “

The USDA NASS Crop Progress report for the week ending Sunday, October 9th shows that precipitation did indeed slow down harvest in some western counties as well as the eastern third of the state. Temperatures averaged near normal, with 4.7 days suitable for fieldwork.

In total, 23 percent of corn has been harvested—equal to last year, but behind the 30 percent five year average. Ninety-five percent of beans have dropped leaves, ahead of last year’s 93 percent and ahead of the 94 percent 5 year average.