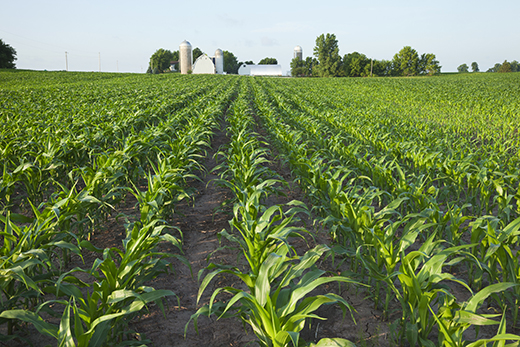 Nebraska planting is almost complete, just in time for the summer heat to kick in. According to the USDA’s National Agricultural Statistics Service’s (NASS) latest crop progress report for the week ending June 12th, 97 percent of soybean acres in the state were in the ground, with 99 percent of corn emerged.

With average rainfall reported in most areas, the temperatures the past week averaged 6 to 8 degrees higher than normal, with more hot temperatures expected this week. Although corn grows well under hot, humid conditions, growers are hoping to see some more rainfall in the coming weeks to keep irrigating to a minimum.

Hay growers are off and running, with the first alfalfa cutting at 81 percent complete across the state, well ahead of last year’s 50 percent marker and the 61 percent 5 year average. Alfalfa stands are in good condition, with 2 percent rating very poor, 3 percent poor, 10 percent fair, 70 percent good, and 15 percent excellent.

Our UFARM managers are reporting that throughout the eastern half of the state the hot temperatures have contributed to very rapid crop growth, although rainfall is beginning to be at a premium, with very spotty rainfalls being reported. However, top- and subsoil moisture conditions are still adequate for the time being, and there are no major crop pest problems to contend with as yet for most areas.

As stated earlier, however, temperatures this week and into the weekend are forecasted to be in the high 90s, with little chance for rain for most of the state, and growers are anticipating the need to turn on their pivots, have they not already.