After a somewhat slow start to Nebraska Harvest 2014, favorable harvest weather allowed farmers across the state to make good gains this past week. Other than a chance of rain for northeast portions of the state midweek, the temperatures look to be above average, and farmers should be able to make further progress in the coming week, especially with corn, which is lagging behind due to high moisture content in most areas.

According to the USDA National Agricultural Statistics Service’s (NASS) weekly crop progress report for the week ending October 19th, soybean harvest across Nebraska was 69 percent complete, while corn was at 28 percent. Overall, for all reported states, soybean harvest has passed the halfway point, and corn harvest is at one third. Although good progress was made for both grains, they’re still lagging behind the average pace.

On the whole, soybean harvest stands at 53 percent complete, compared with 61 percent complete as of this time last harvest season. On average, two thirds of the soybean crop is harvested by this time. Soybean conditions for Nebraska rated 1 percent very poor, 5 percent poor, 19 percent fair, 54 percent good, and 21 percent excellent. The percentage of beans harvested stood at 69 percent, behind 77 percent last year, and the average of 81 percent for Nebraska. 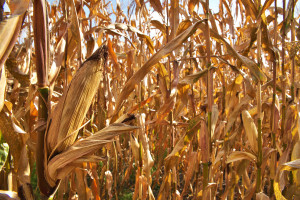 For corn, thirty-one percent of the nation’s crop is harvested, which is up from 24 percent a week ago but off 7 percent from a year ago, and 22 percent behind the previous average pace. For Nebraska corn, conditions rated 2 percent very poor, 5 percent poor, 18 percent fair, 51 percent good, and 24 percent excellent.

As for corn maturation, the weather allowed Nebraska’s corn to further mature, ensuring minimal damage in any areas where frost has remained at bay. Ninety-four percent of Nebraska’s corn crop was mature, near last year’s 91 percent, and slightly ahead of the long-term average of 93 percent maturation. Corn harvested was 28 percent, near last year’s 31 percent, but behind the average of 45 percent.

The DTN ag weather forecast calls for continued mostly dry conditions for the central region in the coming week to ten days—welcome news to farmers who are anxious to get their crop out of the ground. Farmers in the southeast parts of the region—especially those in Iowa and Illinois—have seen cooler temperatures and continued rains, which have stalled their harvest aspirations, so the drier weather forecast should help them surge back to a more average pace.

The sunny warm weather will also allow corn to further dry down, as corn absorbs the needed heat units to stabilize at around 15-20 percent—necessary in order to prevent stalk rot in the field and later in the bin. Farmers across the state continue to play the waiting game, weighing ease of harvest now vs. increase drying costs later, a decision that favorable weather will make easier.

Do you have questions about the harvest progress on your land? Contact UFARM for a free consultation.