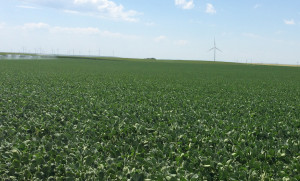 Last week’s hot and dry conditions had Nebraska farmers out in force irrigating their thirsty crops. According to the USDA’s National Agriculture Statistics Service (NASS), for the week ending July 27, above normal temperatures and low precipitation across the state had the irrigation motors roaring. While the dry conditions helped hay harvesting and aided the wheat harvest in progress in the Panhandle, it also significantly drew on the soil moisture of corn and soybeans.
Despite the hot and dry weather last week, as far as crop conditions are concerned, Nebraska’s corn and soybeans are doing well. Corn conditions rated at 19 percent fair, 52 percent good, and 22 percent excellent, with 85 percent of corn silking complete—ahead of last year’s 77 percent.

As for crop conditions nationally, the lack of moisture saw conditions in both crops dip slightly, with a 2 percent dip in soybeans, although 71 percent of the crop was rated good or excellent. Pod setting was at 38 percent as of July 27, ahead of the normal 7 percent.

While the crops in Nebraska and across the country are doing well, weather reports showing a lack of moisture possible in the early weeks of August—a critical growing point for soybeans—has many wondering if that might change. The effects of little to no moisture could be allayed if temperatures stay lower. With Nebraska forecast highs for the coming week to be in the low 80’s, few raindrops will not be as much as a factor.
According to the Commodity Weather Group, “The dryness has developed too late for major impacts to pollinating corn, but some minor soy losses are possible to pod-setting soy in drier sections of the southwest 1/4 of the belt in the next 10 days. Cool air will limit losses though, and an expected return of 11- to 15-day showers to the western Midwest would be in time to avert serious impacts. The 16- to 30-day is also similar to wetter across most of the Midwest, although confidence is still low. Regardless, heat risks remain low through August.”

Do you have concerns about the state of your crops as we head into the home-stretch of the growing season? UFARM Land Managers are on the ground and know firsthand what growing conditions are like in all parts of the state. Let the experts at UFARM help keep you informed about your land.

When is it Time for a Landowner to Change Tenants? What did the August 12th USDA WASDE report hold?
Scroll to top