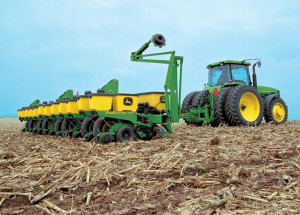 Farmers across the nation are hard at work getting their crops into the ground as we head into the final two weeks of May. The latest USDA weekly crop progress estimates from Monday showed progress being made for both corn and soybeans over the last two weeks. In Nebraska, farmers have also moved forward and are slightly ahead of neighboring states despite various weather-related factors, chief among them being last week’s cold temperatures and some rainfall.

By the numbers, for corn, as of May 18 Nebraska producers had 91 percent of their corn in the ground, versus 78 percent for the same date last year. This is slightly ahead of the five year average of 89 percent for the state for this date. For the total 18 states that the USDA reports these statistics, as of May 18, the nation’s farmers had 73 percent of corn planted, versus 65 percent at this date in 2013. This is only 3 percent short of the overall five year average for this time of 76 percent. Overall, these numbers show that planting progress for corn is once again keeping pace, despite the previous week’s weather delays.

For soybeans, Nebraska farmers have 65 percent planted, versus only 29 percent as of May 18, 2013. This is 10 percent higher than the five year average of 55 percent for the state. Overall numbers show slightly less progress, however, with 33 percent of soybeans in the ground, versus 21 percent in 2013. The overall average is 38 percent by this time over the past five years.

Planting progress only shows half the story, however, and the USDA also reported the percentages of emergence for both corn and soybeans in this week’s numbers. For Nebraska corn, the report showed 43 percent emergence, up substantially from the previous week’s 18 percent, and only slightly behind the NE corn emergence average of 45 percent. Overall, corn emergence was at 34 percent. While this is a significant gain from the previous week’s 18 percent emergence, it is still lagging the five year average of 42 percent. Soybean emergence is close to the usual five year averages, with Nebraska reporting 13 percent emergence and overall numbers reporting 9 percent. The averages are 14 and 11 percent, respectively.

After last week’s low temperatures, where many parts of the state saw frost on three consecutive nights, farmers are concerned that their newly planted crops were affected, and are now in the process of assessing whether or not they will have to replant. Either way, crop growth and development was hampered by the cold temperatures. Farmers concerned with potential damage need to do some investigating. The University of Nebraska Lincoln CropWatch analysts advise the following:

To determine the need for replanting, first estimate stands. Then, estimate yield potential. The most important factor in deciding whether to replant is to calculate expected yield with the current stand versus what you could potentially have if you replanted. Lastly, estimate replanting costs.  Consider costs of tillage, seed, fuel, additional pesticides, and labor. Consider also that delayed planting certainly means higher grain moisture at harvest and the possibility of fall frosts before physiological maturity. You may want to consider planting a shorter season hybrid seed. Caution: Before replanting, contact your crop insurance agent, Farm Service Agency, and others with an interest in your crop.

The weather forecast for the coming week predicts near to above normal rainfall for a large portion of the Midwest, which could add more delays to the last stretch of planting. However, warmer temperatures will help alleviate potential delays to a certain extent. If you have planting concerns or questions about your farmland, feel free to contact us at United Farm and Ranch Management.

What did the August 12th USDA WASDE report hold?
Effects of Dry Winter Weather on Nebraska Farmland
Emerging Technology Trends in Agriculture
The Comeback Crop: Alfalfa
Can Your Land Benefit From Cover Crops Like Turnips And Radishes?
What Does The Latest USDA Report Mean For Landowners and Farmers?
Nebraska Crop Progress
0 replies