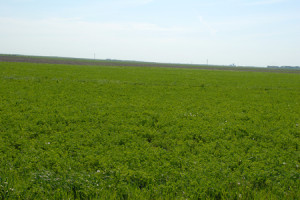 After the extreme drought conditions across the Midwest in 2012, it appears that alfalfa acres—both planted and harvested—rebounded in 2013. This is welcome news to many alfalfa growers, who would prefer a less volatile market that the availability of more alfalfa brings.

Traditionally, growers prefer alfalfa due to its low input costs. Nebraska’s climate is ideal for the growth of high-quality alfalfa, and the May through October growing season allows Nebraska alfalfa growers to harvest approximately 5 million tons on 1.5 million acres each year.

The January USDA report also indicated that growers seeded 2.52 million acres of new alfalfa, also a 5% increase from newly seeded alfalfa in 2012. Interestingly, although this marks the second consecutive year for new seeding, it is still the third smallest seeded area on record.

“Nationwide, we had 2.5 million new acres planted in 2013,” says Diersen. “That tells me we could be coming off the bottom for really low, harvested (alfalfa) acres. Any way you look at it, that’s a good thing.  Without some additional acres, we’re going to have continued swings in supplies and prices and more volatility in the market. This, at least, is a move in the right direction.”

Alfalfa prices in Nebraska hit up to triple times their normal price in 2012 due mostly to the drought, which significantly affected the alfalfa crop. High prices for corn in the years leading up to 2012 also had an effect on alfalfa prices, since many producers reduced their alfalfa production to put in more corn acres.

High dairy demand is also a major driver of alfalfa prices, and various economists believe that the uncertainty of feed sources facing many dairy farmers will contribute to increases in alfalfa hay prices. Economists also expect a high export demand for hay to similarly affect the price of alfalfa. Additionally, should the western growers continue to experience a prolonged drought, alfalfa prices for area growers could increase as a result.

Of course, Mother Nature always has the last word, and time will tell what growing and moisture conditions will greet Nebraska growers during the 2014 growing season. Although recent snowfall is welcome for its moisture, it is evident that the 2014 planting season will be later, and will possibly curb an earlier cutting for many alfalfa growers.

Taken in total, a projected increase in alfalfa acres combined with a healthy demand for the crop points toward a more stable market and a favorable price. UFARM can help you stay on top of the latest crop trends. Feel free to contact us for a free consultation.

What Does The Latest USDA Report Mean For Landowners and Farmers?
What did the August 12th USDA WASDE report hold?
Nebraska Corn and Soybean Planting Progress Report
Nebraska Crop Progress
Effects of Dry Winter Weather on Nebraska Farmland
Can Your Land Benefit From Cover Crops Like Turnips And Radishes?
0 replies

An Alternative to Leasing: Custom Farming Does your Land Have ” Center Pivot Premium”?
Scroll to top